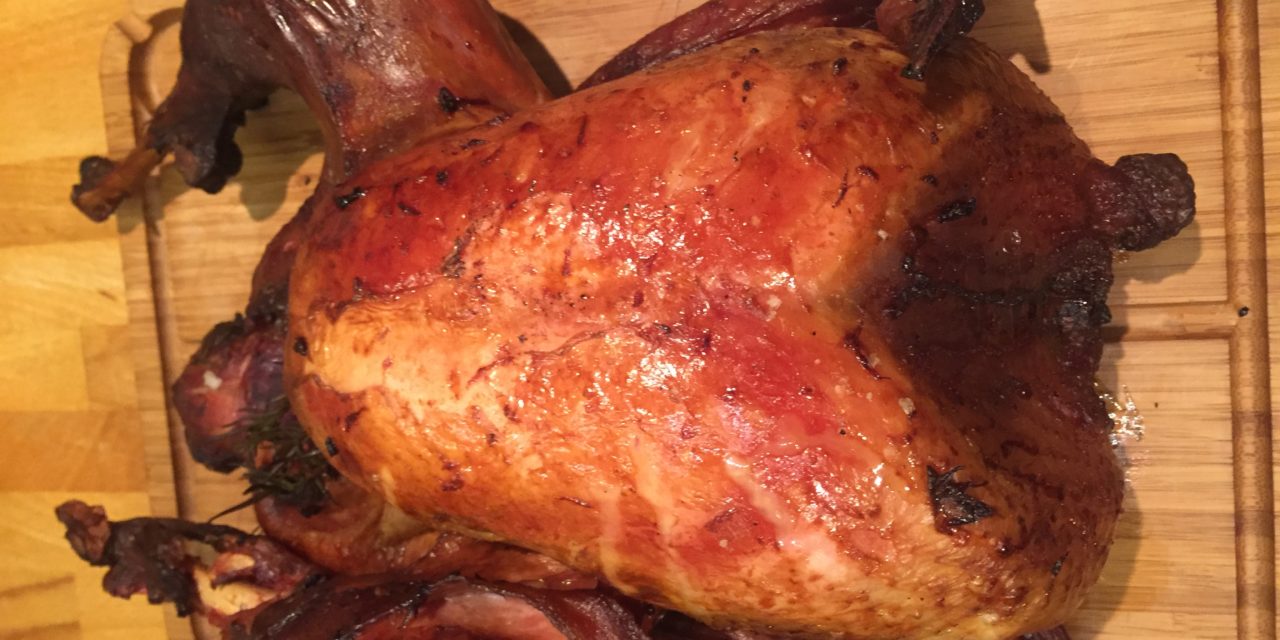 It’s Christmas!
Well, it nearly is.

Last year I smoked a turkey on Boxing day for a big family meal. It went really down well and I was well chuffed with the results.

I thought this year I would do another one in the lead up to Christmas incase it inspires you guys to give it a go. This recipe takes a bit of time as you need to brine the turkey for 24 hours at least but its worth it.

This recipe has taken inspiration from a Grillstock recipe but I hope I have put my own twist on it. No rub on this recipe, you don’t want it to overpower the other delicate items on the table and I think it doesn’t need it.

DAY BEFORE:
Make up the brine for the turkey. Heat up 6 litres of water and stir in the salt and sugar until it has dissolved. Add the rest of the ingredients and leave to cool.
Place the turkey breast side down in a container that will hold the whole thing and poor the brine over the top until it covers it completely. Don’t worry if it doesn’t completely cover the whole thing, I have never managed it, there are normally leg bobbing around sticking out of the top, standard.

Leave the turkey in the brine for 24 hours turning it over halfway.

Store this container in the fridge while its doing it magic, or alternatively because it will never fit in any normal fridge that isn’t in an 8 bedroom Hollywood movie home, store it in a cold garage or outside in an area that the buzzards won’t get to, still in a covered container with some ice packs around it to keep it cool.

Remove the turkey a few hours before you are ready to cook it. Don’t try and drink the brine, I know it has beer in it, but it will make you feel a bit funny (not in a good way)

Get your smoker up to 250f (120/130degC) and choose what wood you want to use. I used oak and apple this time because thats what I have most of at the moment.

Cut one of the oranges in half and place the two halves inside the cavity.

Arrange the bacon over the top of the turkey breast. I got proper fancy and made a weave. Well, it is Christmas, if you cant go nuts now when can you?

Place the turkey on the top shelf of your smoker and the other 2 halves of the orange on the grill cut side down, cover the smoker.

After an hour have a look at it, if the bacon is crispy and brown remove it from the turkey. DON’T eat the bacon right now. Just don’t.
After you have removed the bacon brush the turkey with the chard orange halves you placed on the grill. Do this every 30 mins until it hits 165degF (70degC).
If the turkeys starts to burn in places then cover that area with some foil, this will most likely happen on the wings or the legs.
Another way to check if the bird is done would be to probe the meat and the juices should run clear.

Remove the turkey and place on a carving board and let it rest for 30mins before carving.

This should be pretty banging, get the family round, cook some spouts fall asleep later and have a good one.

Side note: ADD A THERMAPEN TO YOUR CHRISTMAS LIST IF YOU DON’T ALREADY HAVE ONE. 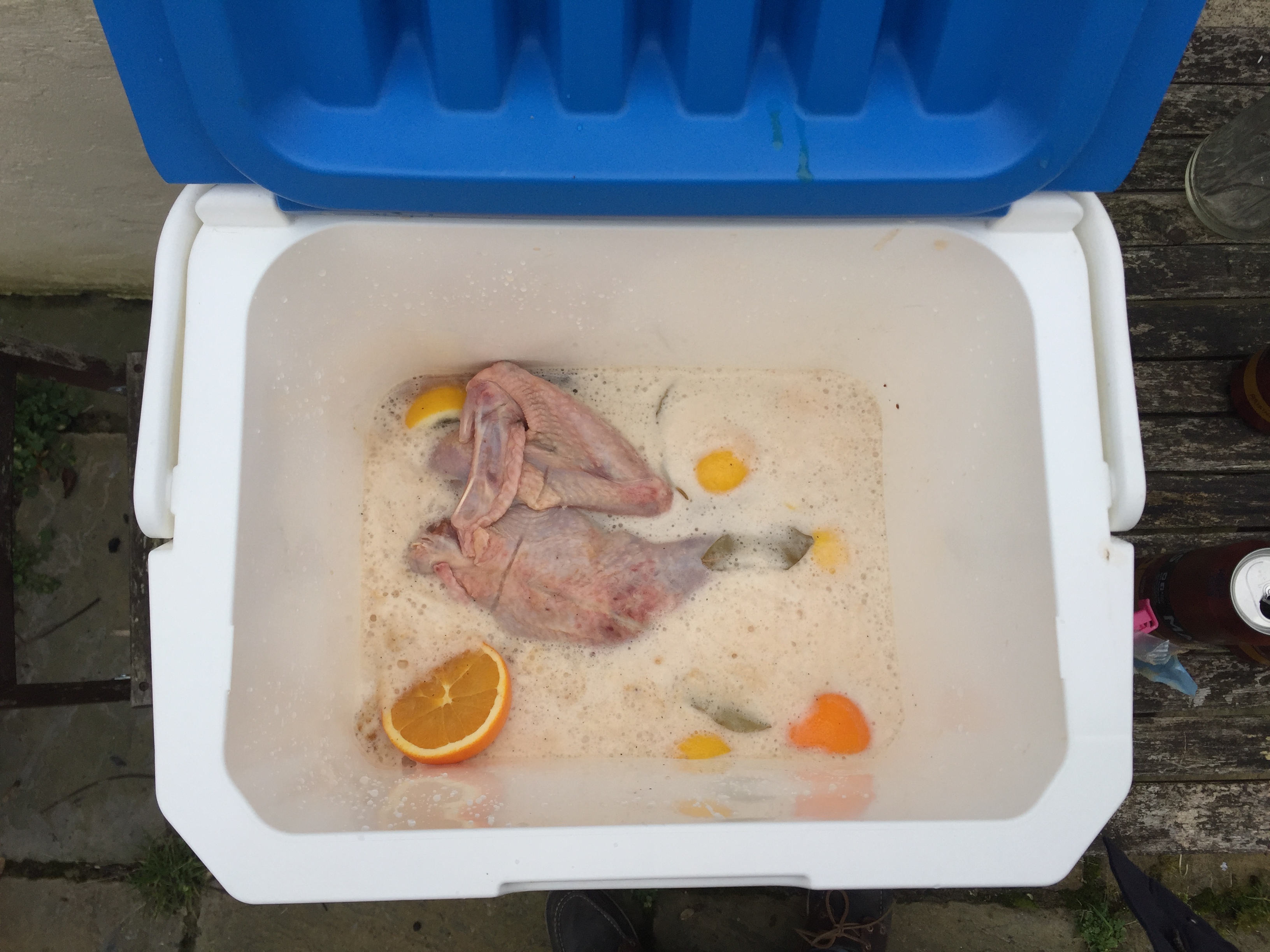 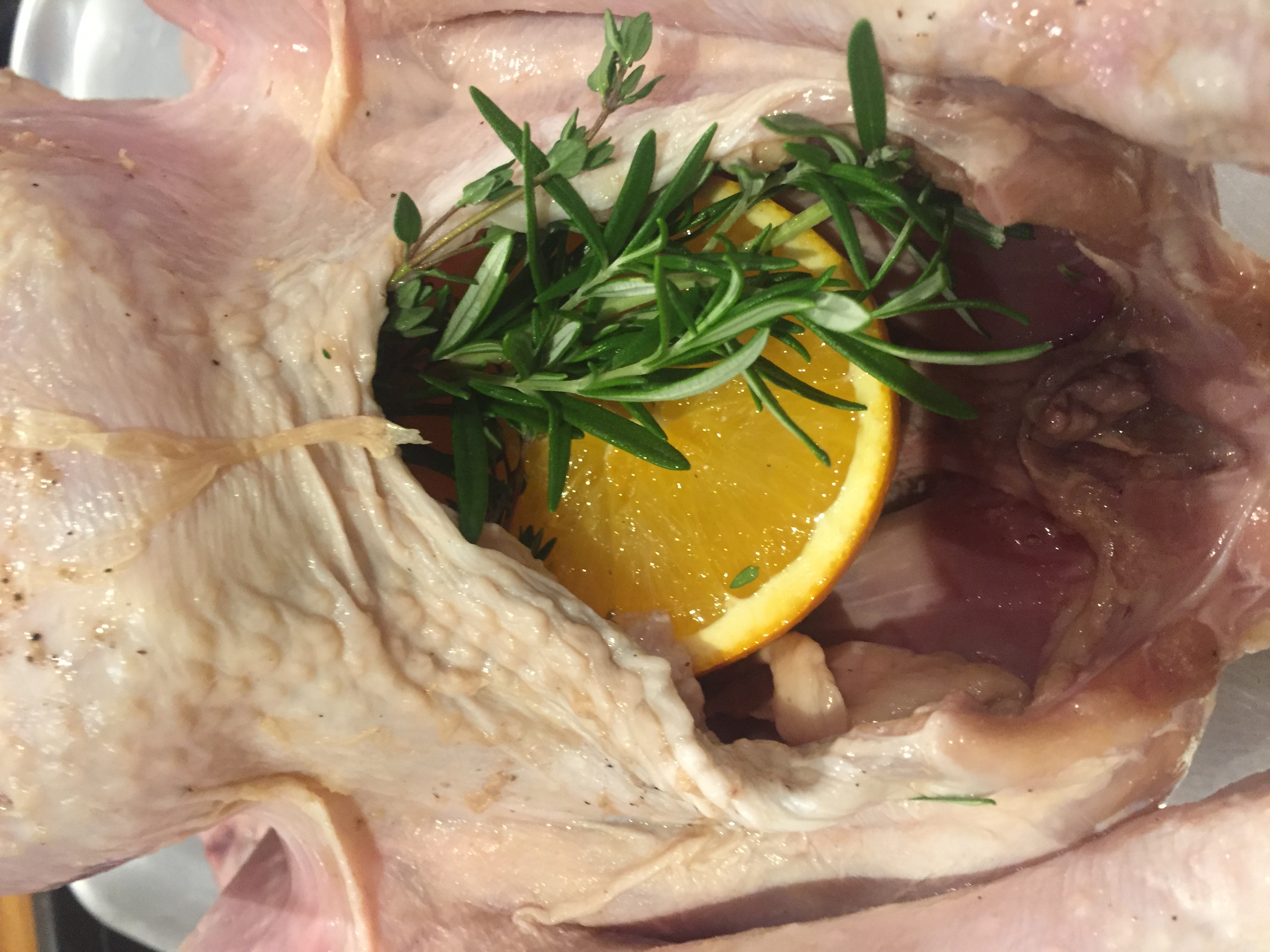 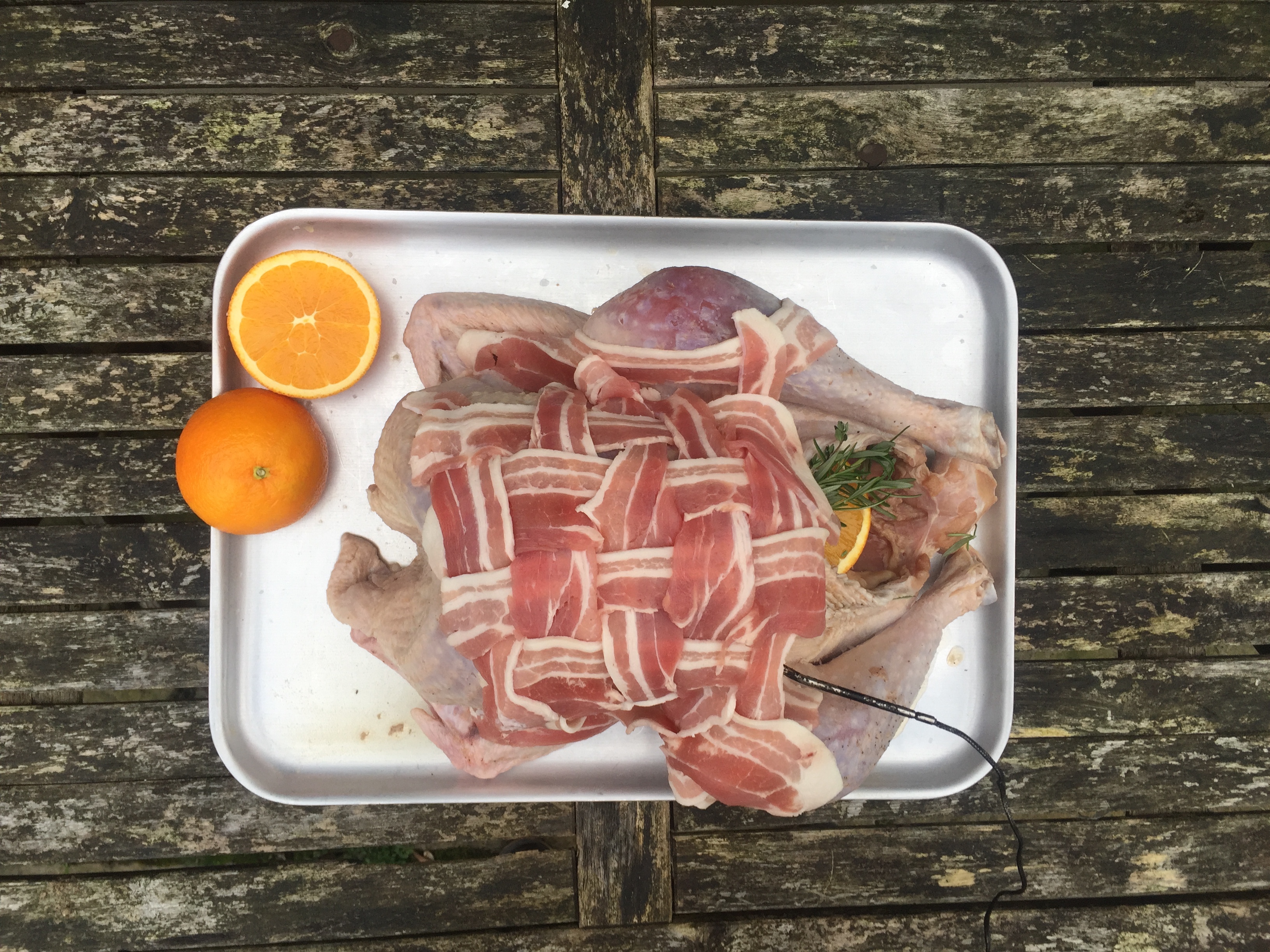 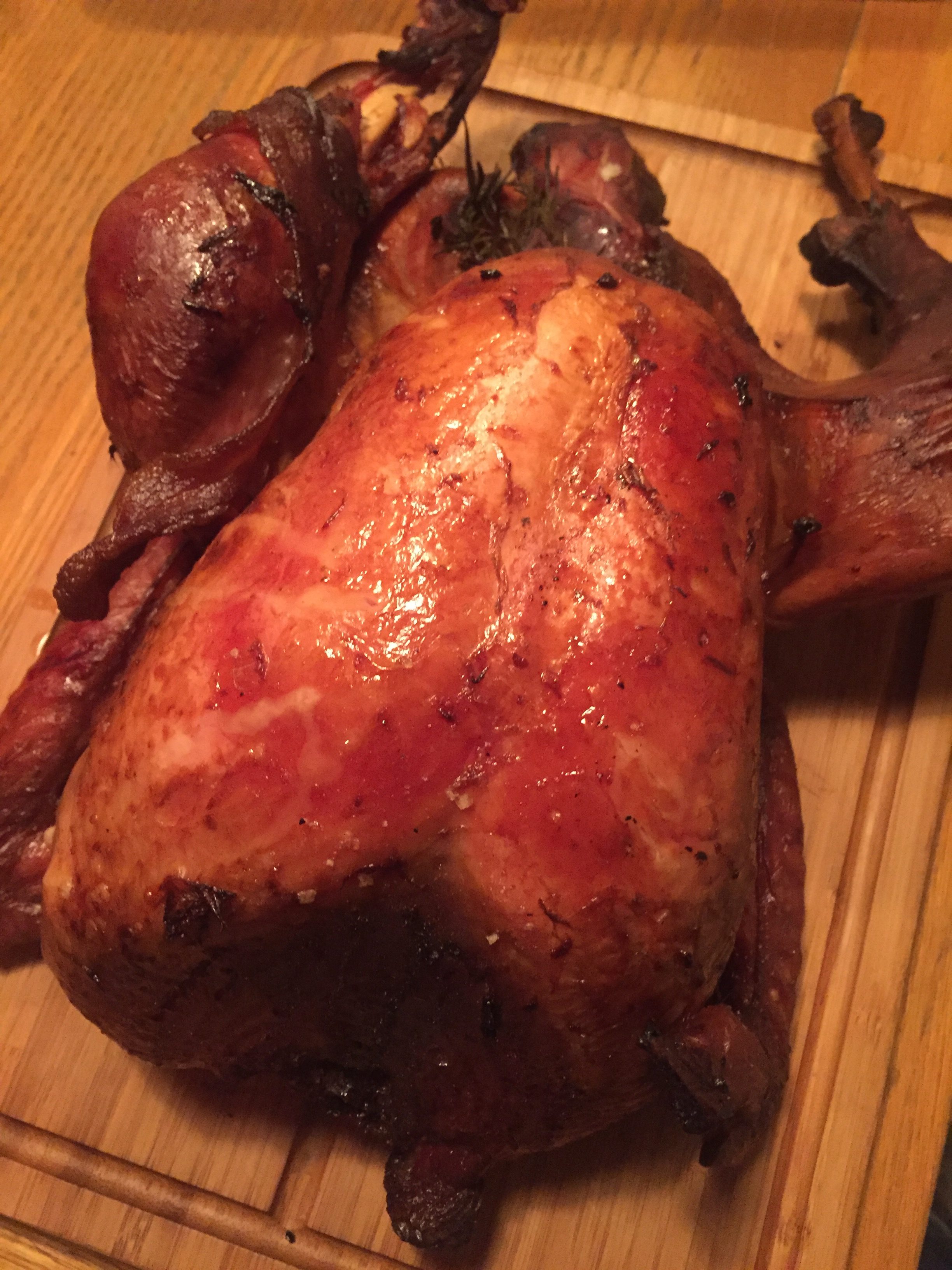